A lot of people often ask me if being vegetarian in Japan is very difficult.
My answer is always, it can be but not for me. Mostly because I’m not vegetarian by choice but because I just don’t like the taste of meat or fish. So I’m okay with meat/fish broth and having meat in my dish (I just push it to the side). I’m not allergic, either. It just doesn’t taste good to me. So for me, being vegetarian is pretty much an extension of being a picky eater.
Japan seems to be known for being unfriendly towards vegetarians. And at times it is…but I think that’s just fine. I mean, being vegetarian is a luxury. But Tokyo is becoming more vegetarian friendly by the day.
Take a look at this amazing vegetarian burger! It’s so good I crave it often. They also have regular burgers (which I hear are pretty amazing as well!) so next time you’re hungry for a burger, try this yummy cafe! 😀 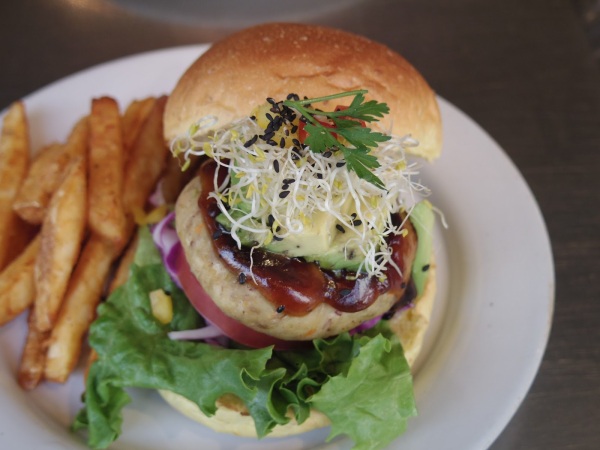 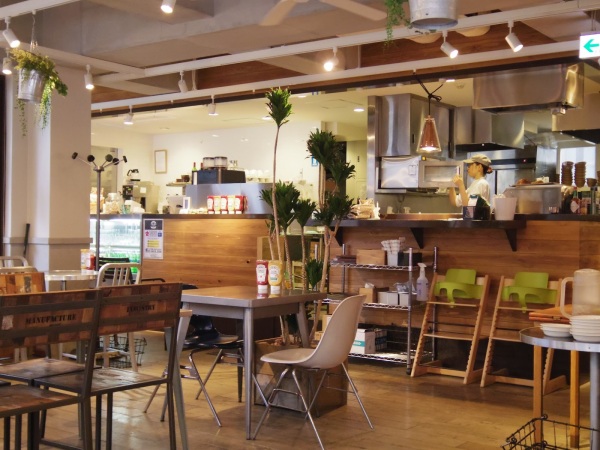 What do you do when you have a pile (and when I say pile, I mean a whopping pile) of strawberries from the nicest farmers in town?
We make jam!!! 😀

First, we cut the stem off and weigh the strawberries.

All you need to add to the strawberries are sugar and lemon.

We all took turns stirring the pot so it wouldn’t burn…it’s harder than it looks.

Ta-daaa!!!
It ended up being a pretty big batch since we made jam in two pots. The kitchen smelled amazing. The minute we decided it was done, we tried it out on top of yogurt. And of course, we patted ourselves on our backs because it was delicious! (hehe!)
It’s really simple to make so if you ever get your hands on a bunch of strawberry, here’s the recipe:
Homemade Strawberry Jam
Ingredients:
1,400g  Strawberries
1,400g  Sugar
(or 1:1 of strawberry and sugar)
1/2  Lemon, squeezed
Directions:
1.
Cut up the strawberries.
Place in pot.
2.
Add the sugar.
Let the strawberry and sugar
sit in the pot for 15-30 minutes.
3.
Turn the heat on high and start to stir.
Smash a bit of the strawberry while stirring.
Once the juice from the strawberry starts to boil
turn the heat to medium and continue to stir.
Also, remove the foam.
4.
Once it starts to thicken
add the lemon juice and mix in.
Turn the heat on high one last time.
And it’s done!

Today I took the morning off work to go to my monthly doctors appointment…and decided to go shopping before heading back to work!
I have been eyeing these overall shorts at Zara for a while now. They go with anything and I’ve been looking for the perfect pair of overalls. It could be my look this summer.
But when I tried them on today, it was like deja vu…I could swear I had the same pair back in grade school. Well…apparently I did!
I posted the picture above with my suspicion of having the same overalls on facebook and guess what my grade school friend T posted on my wall?
In response to your photo you just posted, you are correct.
You did have the exact one in grade school.
Please see exhibit A below.
(you are in the red if you don’t recognize yourself).

Oh the good old 90s. Don’t you love how crazy old pictures like this can just pop up on your wall like this on facebook? The overalls, the big tshirts, the socks with Birkenstock look. I love it all because it all reminds me of how much fun we all had growing up together.
Do you sometimes walk down memory lane and get nostalgic over old photos? 😀

This past weekend I was in Miyagi prefecture again with my friends. And if you couldn’t tell from the gif above, it was a fun fun weekend. Posting pictures from the trip real soon but had to share our jump for joy today!

Who knew jumping around in the parking lot would end up being so much fun? We were a little tired but once we started taking these pictures, our energy level spiked. Before we knew it, we were doing crazy jumps over and over again.

You should try it sometime. You’ll discover a whole new meaning to “Jump for Joy!” 😀

Actually the rainy season in Tokyo was officially announced on May 29 this year.
And as usual, the minute they announce the start of the rainy season…it stops raining. Weird how that works. We’ve really had mostly sunny days since we hit rainy season. So sunny, in fact, that I already have quite the sun tan from just walking to and from work.
But it seems the rainy season is finally upon us. The forecast for this week is rain everyday…and as much as I love waking up to a sunny morning, I’m glad it’s raining.
Because the beautiful hydrangeas are in full bloom and nothing compliments them better than rain. And yes, this is just my opinion. But look how pretty they look with the raindrops!
Happy rainy season 😀 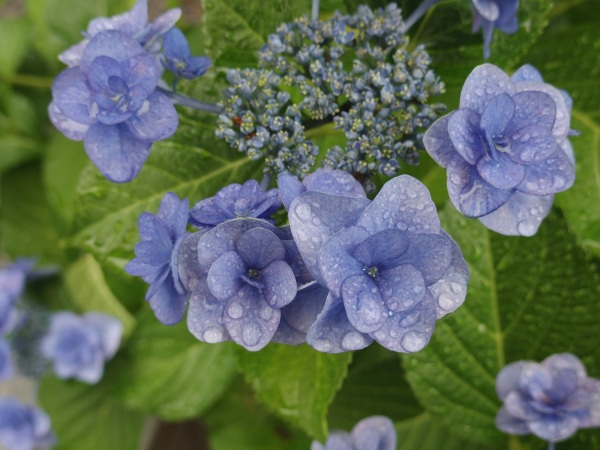 Isn’t this view amazing?
These photographs are a series called Vertical Horizon by French photographer, Romain Jacquet-Lagrèze. He captures the unbelievably tall buildings in Hong Kong beautifully!
I mean, we have our share of skyscrapers in Japan…but they are nothing compared to Hong Kong, which has even less space to build on. So they grow vertically. And also, they apparently don’t have earthquakes. Which is a very good thing because I saw a lot of buildings in Hong Kong that would never even get past the building permit stage here in Japan.
But they work over there and are amazing to see! 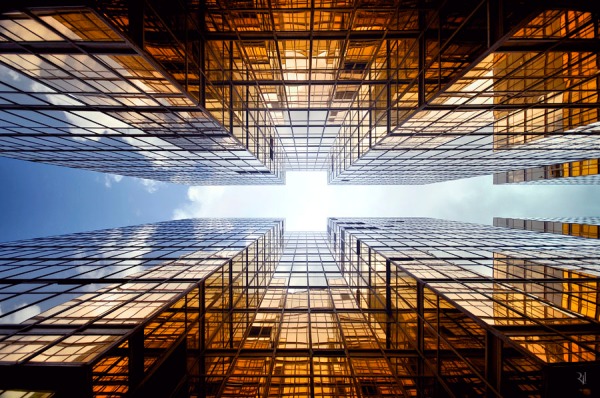 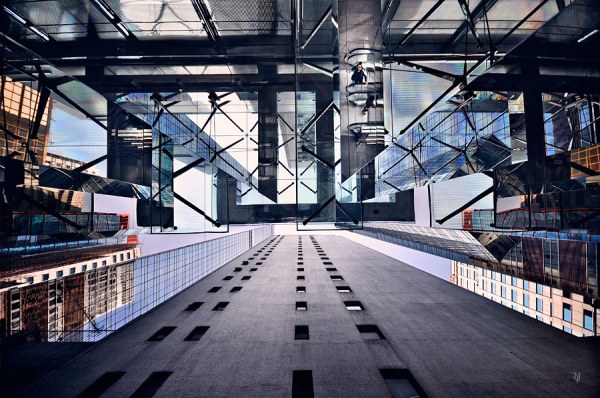 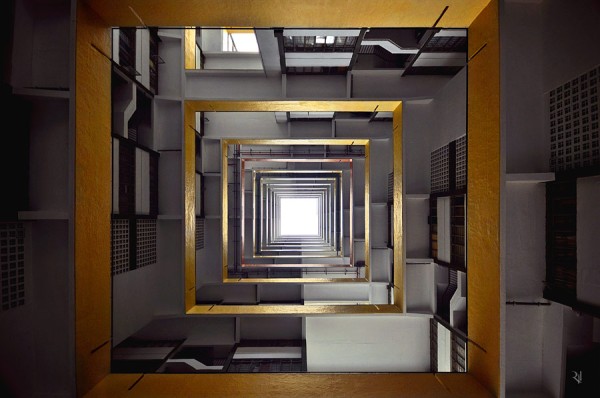 Can you believe it’s June already?
And I’ve still working on my Okinawa posts. I need to speed things up! So here is a quick post on one of the most popular tourist spots we stopped by, Shuri Castle, which we call Shuri-jyo in Japanese.
One of the reasons I’ve been putting these pictures off for so long is because I needed to look things up. But I can’t put it off any longer and still haven’t read enough to write extensively, so…I’m going to just show you some pictures here and let you look it up yourself if you want more information! 😀
Here is a quick quick history of the Shuri Castle:

So from 1429 to 1879, the Kingdom of Ryukyu reigned on the island, which is now Okinawa prefecture. Shuri Castle was the royal residence and also the administrative center of the kingdom. Records state that Shuri Castle  burned down several time and had to be rebuilt. But after the island became part of Japan, it was totaled during the war in 1945 because the Japanese army set up headquarters there (which everyone knows is just asking to be bombed).

After the war, it became the campus for the University of Ryukyus for awhile. During that time, Okinawa was actually part of the United States administration until they returned it to Japan in 1972.    Shuri Castle officially began reconstructing in 1992 to what is now the Shuri Castle Park.

And as you can see in the photo below…(drum roll please!)…Shuri Castle was one of the Ryukyu castles that was registered as a World Heritage Site in 2000!

So that’s a little history for you…and here are some of the pictures:

My family tends to read everything together out loud…I know, annoying! haha! 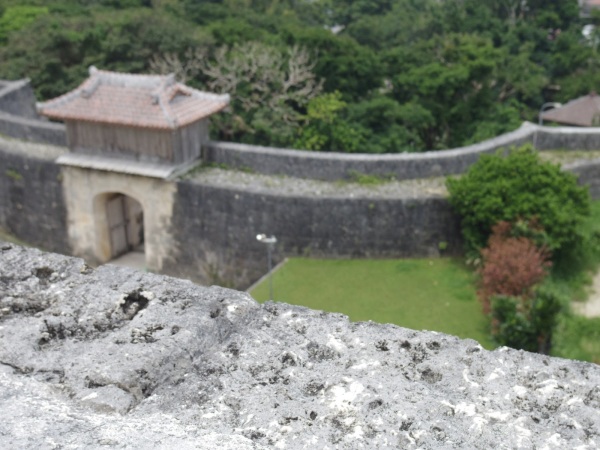 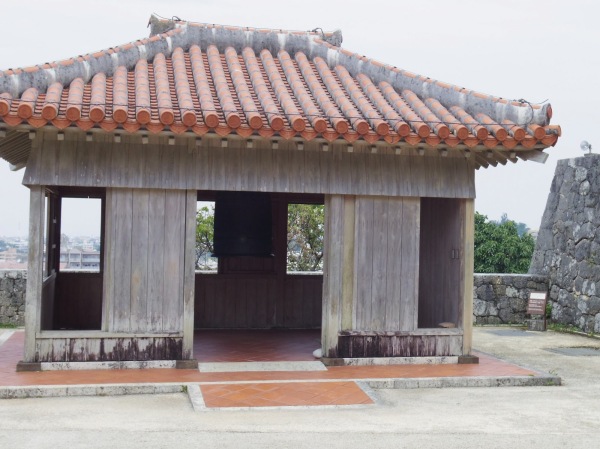 A building which houses the Bridge of Nations Bell.
“Inscriptions on the bell describe the Ryukyus
as a beautiful nation in the southern seas, using its ships to serve
as a bridge between China, Japan and Korea, and with a flourishing trade.
The words proudly express the spirit of the ocean-faring kingdom.” 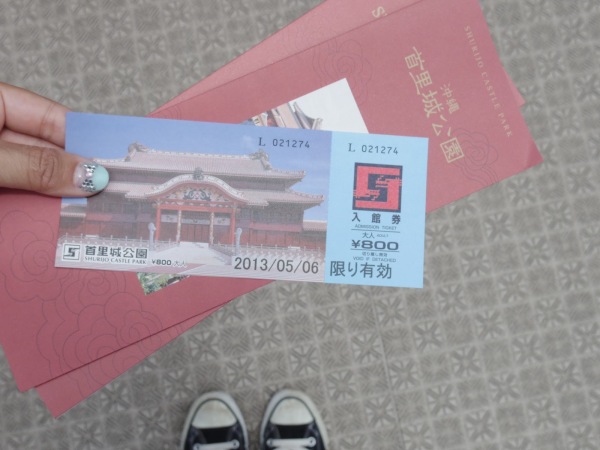 You need a ticket to enter the main area. 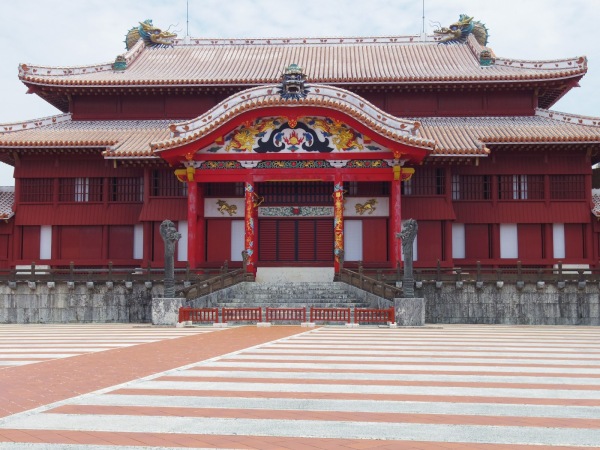 The main building, Seiden (正殿), standing majestically on the Una Courtyard.
Most of the buildings around the courtyard have buildings which are fascinating!

Below were the actually walls of the Shuri Castle that were preserved.

The inside was simple, yet gorgeous. I love the bright colors used in the design. 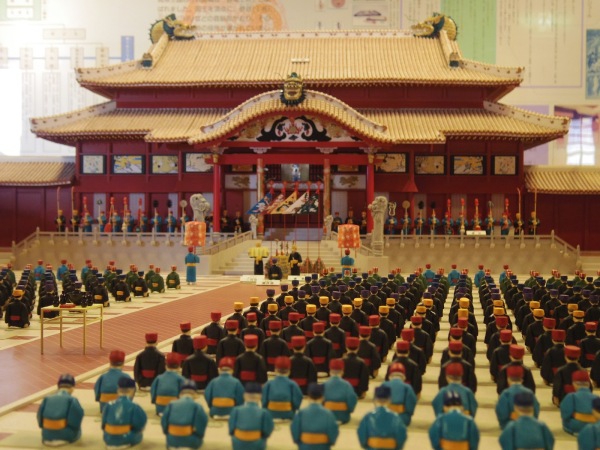 One of the miniature replicas on display…my ancestors were sitting in the Uekata (親方) rank. 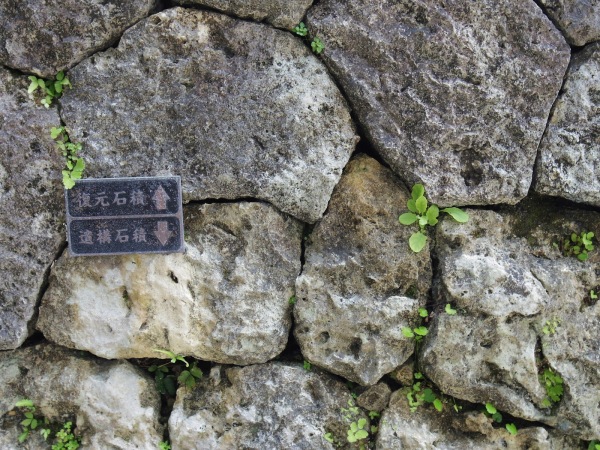 The outer wall shows which rocks are original and which rocks were replaced when rebuilt. 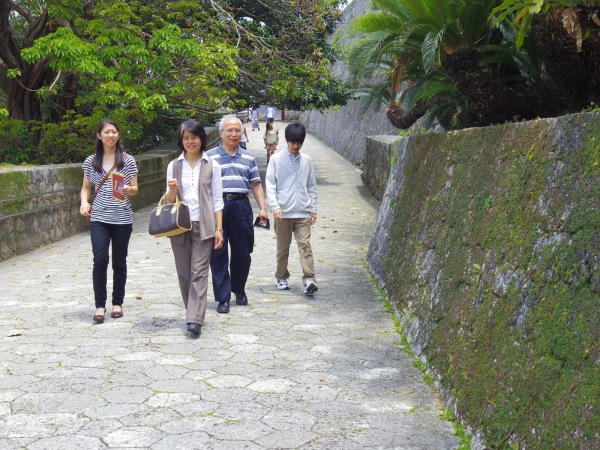 We only had about 2 hours to go through the castle grounds and at first we thought that would be plenty of time…but actually we had to rush through it all because there was just so much to see. Especially when you want to read through the information. It was just really interesting for me because this is all part of my history.
Funny story. I had no idea that Shuri Castle was rebuilt so recently. I remember talking with my mom before this trip and mentioning I wanted to stop by Shuri Castle. And my mom says, “Oh I’ve always wanted to go see Shuri Castle, too!” Which was really odd for me because I was thinking my mom was born and raised in Okinawa and why wouldn’t she have seen it already? I thought maybe it was one of those things when locals don’t go to touristy spots because they’re always there?
So it was quite a surprise to me when I learned that Shuri Castle was only rebuilt in 1992. Since we were state side until 1996, this all made sense. And it was just really fun learning about our history together!
I hope you have a chance to go see Shuri Castle someday, too 😀