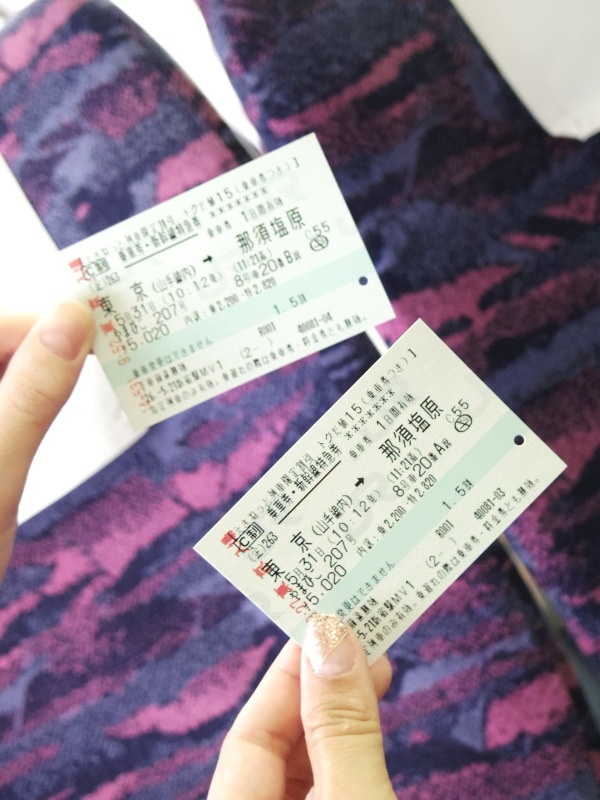 I really had no idea Nasu-kogen (那須高原) was so close to Tokyo.
This was over two months ago, but I was in Nasu (那須) for the weekend to attend a friend’s wedding! I was really excited about this weekend because I hadn’t been to a wedding in a while (love feeling the love!) and technically this was my first time stepping into Tochigi prefecture, which is where Nasu is located.
Nasu, along with Karuizawa (軽井沢), are the top two summer resorts for people in the Kanto area because of the cooler weather, due to their location in the highlands. We call these places hishochi (避暑地) in Japanese, which translates to “land evading heat.” And I can definitely vouch for that. The weekend we were in Nasu, Tokyo was apparently hit with the first heatwave of the season but we didn’t feel any of it, especially up in the mountains.
I would recommend a rental car if you’re ever in Nasu. Everything is located pretty far from the main shinkansen/train station and it makes exploring much easier. But since the main reason my friend and I were there was for the wedding, we stuck with trains and buses to explore a bit of Nasu.
We took the bus from Nasu Shiobara station to Nasu Yumoto (那須湯本), a place that has been famous for their onsen (hot springs) since they discovered the very first one, Shika-no-yu (鹿の湯), over 1,380 years ago in year 630 (read more about the history in Japanese here). They also established the Nasu Onsen Shrine (那須温泉神社) close by around the same time.
We took a short walk through the Nasu Onsen Shrine premises and then down below to take in the amazing sight of hundreds of jizo standing along the mountain side. They are called Sentai Jizo (千体地蔵), which means one thousand jizos, but in reality they still have a bit to go to reach that number. A local craftsman started handcrafting these jizos in 1978 and continues to do so today with prayers for peace.
I noticed that this whole valley was mostly rock and sand, even though the surrounding mountains were lush with greenery. You could say the fault lies on a large rock that sits there called Sessho-seki (殺生石), which translates to “rock that kills the living.” People in the olden days believed the rock had a spirit within it and named it Sessho-seki because they saw many plants and even animals that came near it suddenly die. There’s even a famous legendary story regarding Sessho-seki (read here).
We now know that the real reason this happened is due to toxic gas, such as hydrogen sulfide and sulfur dioxide, which sprouted from the ground surrounding Sessho-seki. You can still smell the odor quite distinctively and even to this day, certain areas around Sessho-seki are blocked off due to the harmful fumes. Isn’t that scary? Although if you got a whiff of the smell like I did, you’d know right away that it can’t be that great for you. It smelled worse than the onsen mud pack in Kagoshima!
Speaking of onsen, my friend and I didn’t have time for that but we did manage to relax in an ashi-yu (足湯), which is an onsen for your feet. It’s the perfect way to rest your feet after walking around for awhile. We also ate soba before heading off to visit Nasu Alpaca Farm, because who doesn’t want to hang with Alpacas? (Blog post to come soon!) We really had a great time getting to know Nasu. It’s on my list of places to revisit…I bet late fall in Nasu is gorgeous!
Here are some photos: 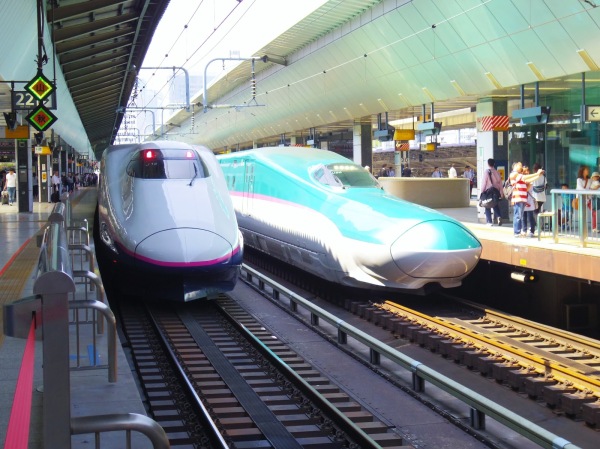 It’s been awhile since my last Shinkansen ride…they really are fast.

Nasu-shiobara Station is where most people get off to go to Nasu Yumoto.

I forgot what they are called but they were handing out these fish in front of the soba shop!

We had lunch at Nasu Yumoto…nothing like cold soba in the summer! 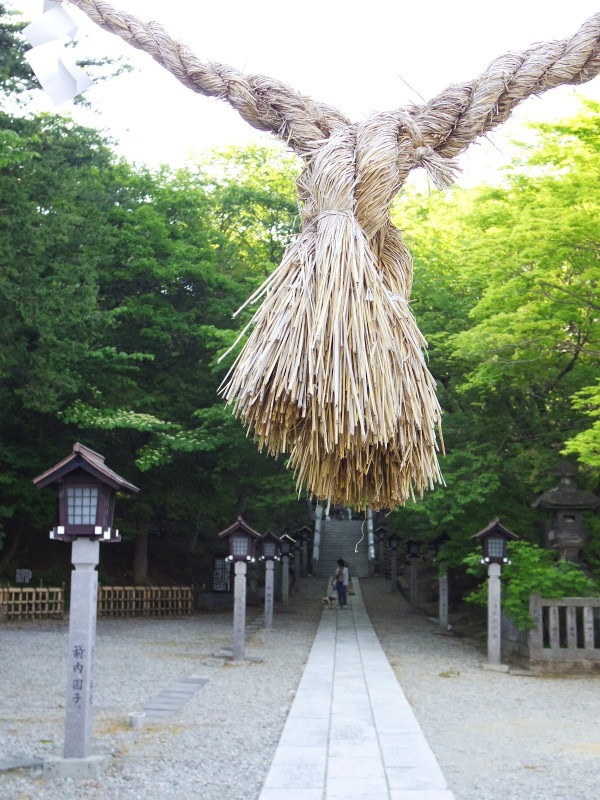 This was the entrance to the Nasu Onsen Shrine (那須温泉神社).

This was the path leading up to it…and silly me, I forgot to take a photo of the main shrine!

Steep stairs leading up to the Atago Shrine (愛宕神社) located by the Onsen Shrine.

The view of the valley below…we could already smell the sulfur odor from here.

The creepy Sessho-seki that kills everything that comes near it.

Even today there is a fence blocking us from getting closer. 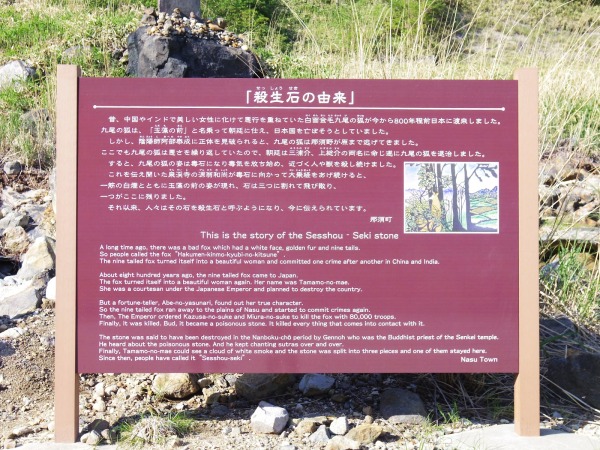 One of the handmade jizo…many people place coins at the feet of the jizo for their own prayers.

Many of the Jizo had crocheted hats and scarves wrapped around them.

My omikuji from Nasu Onsen Shrine…it said that change was coming. Hmmm. 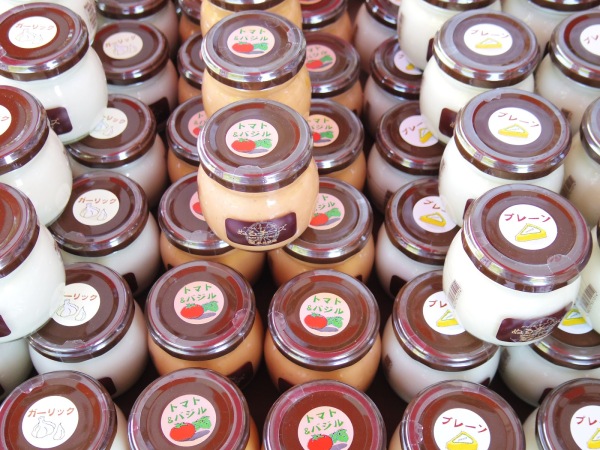 Nasu is also known for their fresh fruit and vegetables. These dips were on sale.

The ashi-yu felt amazing, even though the water was really hot at first. 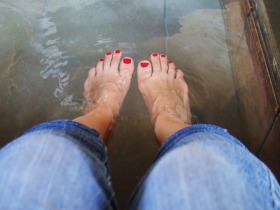 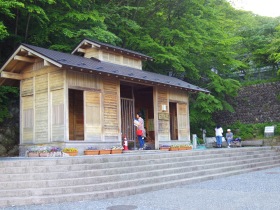 Located at the foot of Nasu Onsen Shrine, it’s free for anyone to dip their feet into.

I had soba for dinner even though I had it for lunch, too. So good! 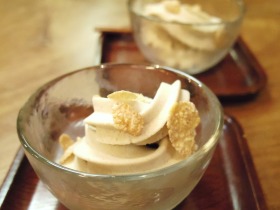 9 thoughts on “The Day Exploring Nasu”