There is nothing quite like walking around town wearing a kimono.

I’m not quite sure why it feels so great. Maybe because I don’t wear it regularly so the occasion feels special. Or maybe because it wraps beautifully around a woman, especially one with no butt and no boobs. Either way, I love it and never pass up an opportunity to wear one.

During our new years holiday in Ehime, my sister and I decided to stop by Kurashiki (倉敷), a small town in Okayama prefecture, before heading back home to Tokyo. And because Hatsumode (the first visit to a shrine or temple in the new year) is a special occasion, we decided to get dressed up! 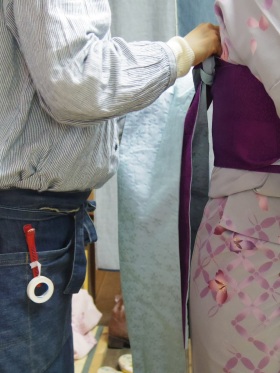 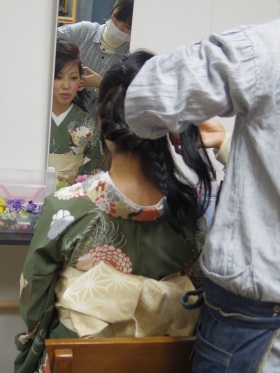 The process of putting on the kimono is called Kitsuke in Japanese. 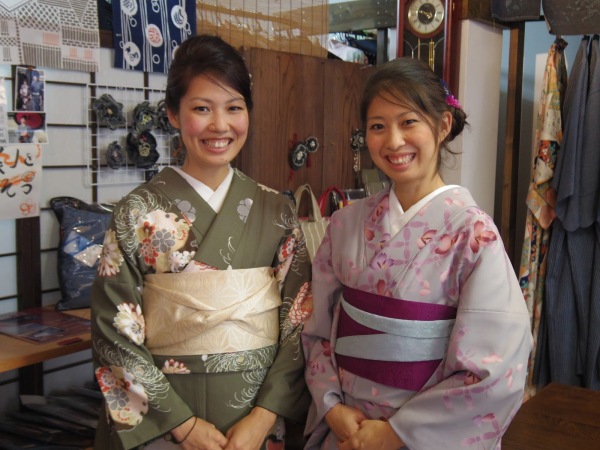 We rented the kimono for the afternoon at Kurashiki Kimono Komachi.

So many beautiful stores are located within Kurashiki’s historical quarter.

The official flower of Kurashiki is Fuji (Japanese Wisteria).

Okayama prefecture is famous for their Bizen-yaki pottery. 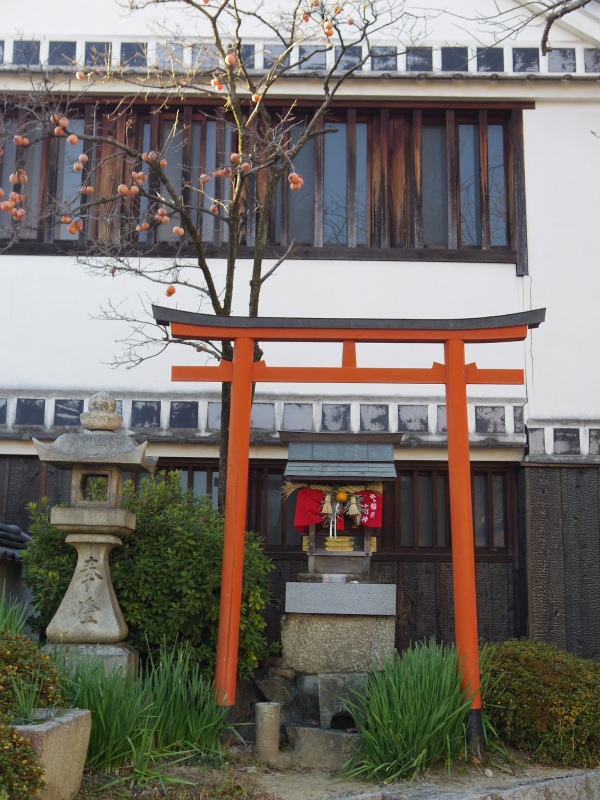 I thought the persimmons hanging from the naked tree above the torii was quaint.

For hatsumode, we went to Achi Shrine (阿智神社), a 1,700 year old shrine which sits atop Mount Tsurugata (鶴形山 tsurugata-yama). This mountain is located in the corner of the Kurashiki’s historical quarter and in the olden days it was an island surrounded by the waters of the Seto Inland Sea (瀬戸内海). For that reason, Munakata Sanjojin (宗像三女神), known as the three goddesses of the sea and voyages, is enshrined here.
Did I mention this was a mountain? Even though it was a little mountain, it was quite the challenge walking up all those steps in our kimonos. Literally an uphill battle. But Achi Shrine was not only beautiful itself but the grounds had an amazing view of the city of Kurashiki. So glad we went up there.
I wasn’t counting how many steps we climbed but Achi Shrine apparently has a name for each set of steps. The first set has a total of eighty eight steps and is named Beiju hill (米寿坂). We call being eighty eight years old Beiju because the kanji for Bei (米) can be broken down to the kanji for eighty eight (八十八). The next set has a total of sixty one steps. It is called Kanreki hill (還暦坂). This comes from our Kanreki celebration in Japan when someone becomes sixty, which is considered sixty one in the traditional kazoe-doshi age system.
Finally the last set of stairs is thirty three steps, called Yakubarai hill (厄払坂) and it refers to the superstition of Yakudoshi (厄年), a year of bad luck, which is said to be the year a woman turns thirty three in the old age system. (The men have a different age for their Yakudoshi). This hits home because technically this year is my Yakudoshi (I turn thirty two this year…eek!).
I always think it’s interesting how many things have a deeper meaning in Japan, even the number of steps to climb up to a shrine.
Here are some more pictures of Achi Shrine and Kurashiki:

The entrance to Achi Shrine was in full new years festive mode.

Many people writing out their prayers and wishes on the wooden Ema (絵馬). 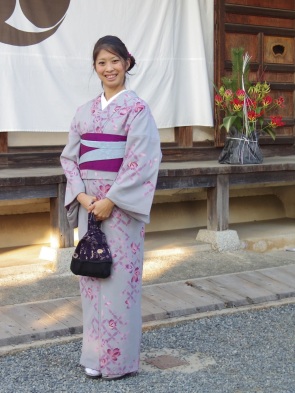 Kimono photos in front of the main shrine.

The Ema (絵馬) at Achi Shrine reminded me of Black Beauty 🙂

So many different kinds of Omamori (お守り) to choose from! 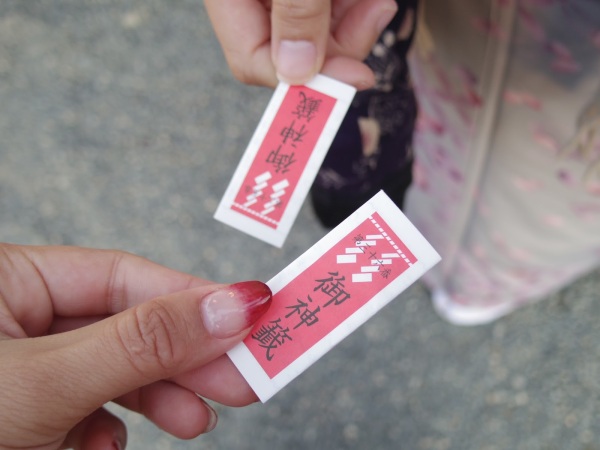 My sister and I always pick up an Omikuji (御神籤), which tells your fortune.

Mine had many wise words for me, such as “health is very important.” So true. 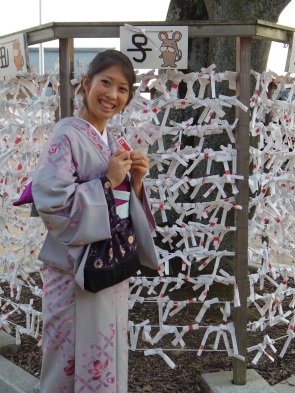 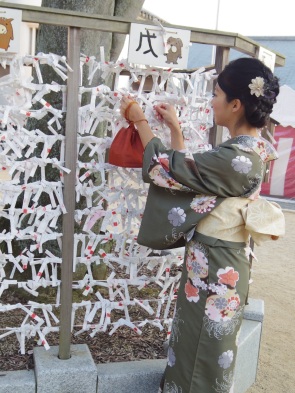 Achi Shrine had a place for people to tie their Omikuji according to your year of birth!

My favorite view of the city below…so many lovely roofs.

I love new years decorations so much…I could start a blog.

We didn’t have time but the Ohara Museum of Art is on my list of places to visit next time!

Traditional hand towel shop….I didn’t trust myself to go inside.

Tiny new years decorations right outside of a shop entrance.

Various types of Okaki, a rice snack. We took forever to choose!

My sister ended up getting the red shiso flavor and I got the yuzu black pepper flavor. Yum! 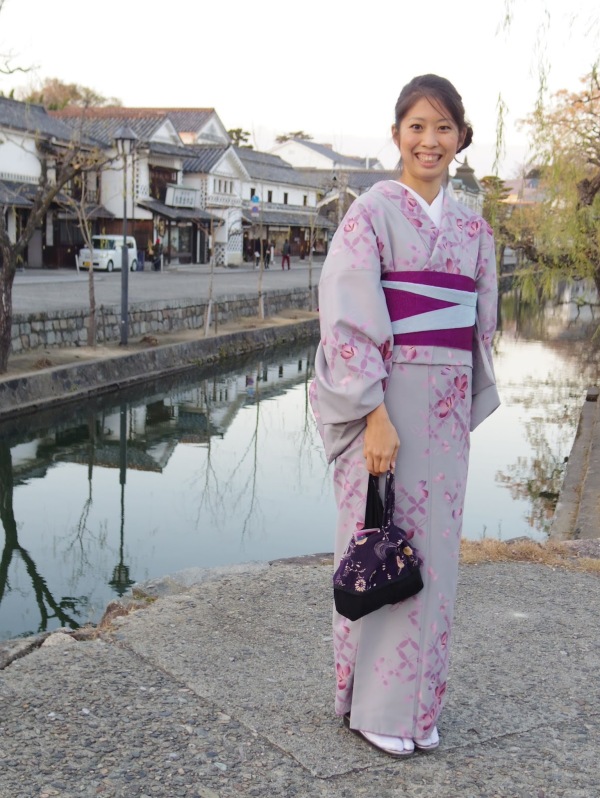 My sister standing by the famous Kurashiki river.

We had such a great time in Kurashiki…already looking forward to going back this summer! 😀

2 thoughts on “The Hatsumode in Kurashiki”